Andernach to Koln. Warm and flat.

Total mileage :- 667 miles
Hotel :- Hotel Krone
At the hotel Fuchs we were asked if we could leave early, not because of John P's behaviour, but the landladies husband had a hospital appointment. He was not keen as instead of helping us leave he insisted on showing us the flood markers for all of the floods. Then as a bonus he showed us all the flags of countries he had visited. Even so we were on the street by 9.15 - a record.
It was dry and the weather looked promising. A very pleasant ride took us along beside the road and above the river for quite a while. We had a good view of the river valley as it began to flatten out. The route was clear and when close to the river, well clear of the water. Our hope that a couple of shorter days would give the water time to drop proved correct.
At Bad Breisig, whilst Ann and the Parkins were buying supplies for the day, I saw a recumbent trike approaching with Union flag and German flags flying. 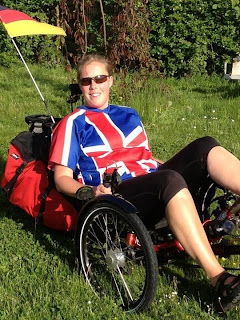 by an English girl, Auntie Helen, she stopped recognising our tandem and had a chat. Helen had also had problems with flood water, and being quite low it had more consequences for her than us.
http://www.auntiehelen.co.uk/ko2ko-koblenz-to-koln/
Not long after leaving Helen and her cake we had a flooded path. It was at least 100 metres, and got deeper near the end. Ann Managed to hold her feet up to keep them dry while I got my feet soaked.
We continued on, following a good path into Bonn, right through the city and had lunch on the other side. After lunch we had the first of only 2 diversions for the day. The debris and mud made some parts pretty dirty, but usually the diversions are signed and clear. 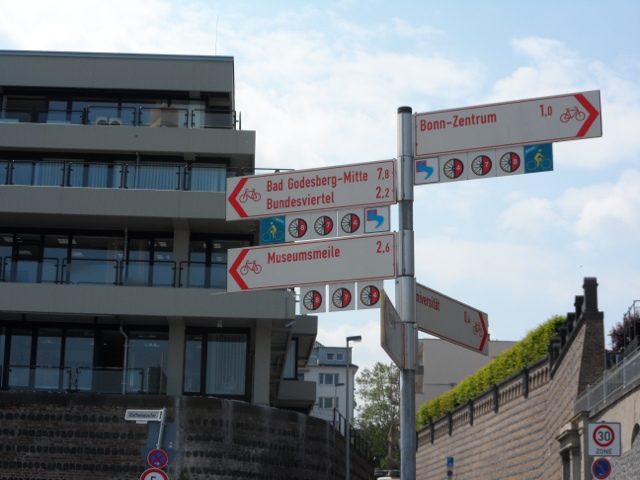 Amazingly many parts had already been cleaned, mud hosed off, flowers replaced, grass cut and debris cleared. We could still see castles on hill tops as we rode along.
We made good time and were soon approaching Koln. We passed the campsite Ann and I knew without us recognising it. It had been flooded out and the paths into town were under water. It was difficult to find rooms, but we managed in the end, our hotel is near the cathedral. A beer and meal quickly followed. A very good day.? I nearly forgot to mention we found a bike path sized covered bridge, which Ann duly recorded. 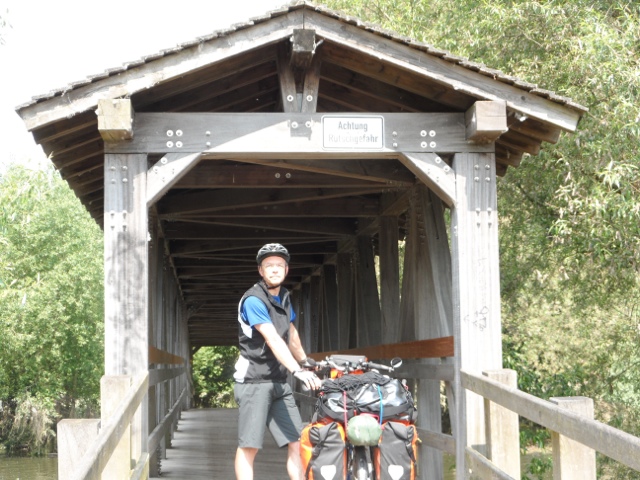